Pregnancy may seem like it’s flying by. But if you are feeling some uncomfortable symptoms, things may seem like they’re dragging. Either way, at ten weeks pregnant, you are about a quarter of the way through your pregnancy. There are some exciting developmental changes for your baby this week, along with some continuing or new pregnancy symptoms for you.

Your body is continuing to change little by little. Although most people may still not be able to tell you’re pregnant, your belly may be starting to get a bit round.

Although you may not have gained any weight, or it may only be a couple of pounds, it may be hard to button your pants. Blame it on bloating and the fact your uterus is starting to get a little bigger.

Even if you are not quite showing, your shape is probably changing. Your waist may be starting to disappear, but your boobs are appearing a big bigger every week.

On the bright side, you might not only experience annoying pregnancy symptoms. There are some nice side effects of pregnancy too. For example, your hair may have never looked better. The increase in hormones is causing your hair to grow faster and fall out slower than it did before pregnant. The result is thicker and shinier hair. 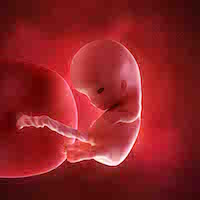 Your baby is a little over three centimeters and weighs about a quarter of an ounce. Since your baby is still so small, it’s hard to believe just how complex his little body is becoming. But there are a lot of developments. For example, his vital organs, such as liver, intestines and brain are starting to function. In fact, the neurons in his brain are developing at a rate of about 200,000 every minute.

Bones and cartilage are also forming, and your baby’s legs and arms are taking shape. Indentations, which will become the knees and elbows have appeared, and little teeth are forming under the gum line.

By ten weeks, your baby is moving around a bit. His arms can bend, and he is able to kick his legs. Since he is only the size of a prune, you won’t feel any movement just yet. In another month or so, you may be able to feel those first flutters.

Since a lot of your baby’s organs and parts have formed, she is less susceptible to developmental dangers. But it’s still essential to steer clear of things, such as alcohol and smoking, which can harm your baby.

If you develop bleeding, you might be worried about a miscarriage. But bleeding can also occur for other reasons including irritation to the cervix from sex or a pelvic exam. In some instances, the cause of spotting is not always found.

Bleeding due to a miscarriage is often bright red and usually becomes progressively heavier and may be accompanied by cramps. If you experience bleeding during pregnancy, try to remain calm. It’s important to call your doctor as soon as possible. Even if bleeding has stopped, your doctor may want to perform some tests to make sure everything is progressing normally.