Week two brings more preparations for conception. During this week, your menstrual bleeding has stopped, and your body is once again preparing for possible conception.

If you have been tracking your fertility, you know you’re getting close to ovulation. Although you may prefer to let baby making be spontaneous, if you want to increase your chances of conception, it’s helpful to know when you ovulate.

The stage is being set for a sperm to fertilize an egg. But before an egg can be available to an eagerly awaiting sperm, you have to ovulate.

It’s helpful to understand what ovulation is. Ovulation occurs when an egg travels from the ovary through the fallopian tubes and is available for fertilization. The process is triggered by certain hormones.

Shortly after your menstrual bleeding stops, several eggs start to mature inside a follicles, which are fluid-filled sacs that grow on the surface of your ovary. Hormones including follicle stimulating hormone (FSH) and luteinizing hormone (LH) play a key role. FHS causes the follicle to mature, and LH causes the egg to be released from the ovary.

Usually, only one egg is released each month and makes the trek into the fallopian tube where it will hang around for about 24 hours. If your egg is not fertilized in about a day, it will die, and you’ll have another try next month.

Although it can vary, a typical menstrual cycle is about 28 days. About halfway through your cycle, which would be day 14, you can expect to ovulate. But that timeline is just an estimate. Some women ovulate earlier in their cycle and some later.

Several factors can affect when you ovulate each month including stress and illness. Even changes in sleep patterns and weight can affect ovulation. Because the timing of your menstrual cycle may not be set in stone, it’s helpful to track when you are ovulating to increase your chances of becoming pregnant.

Although not all women may know exactly when they ovulate, there are signs that indicate ovulation may be occurring soon. For example, some women experience a change in vaginal mucus. A few days before ovulation, you may notice vaginal discharge has increased and is slippery and clear. The increase in mucus helps move the sperm along so it can reach the egg for fertilization.

Some women also develop pain in their side right around ovulation. This pain is called mittelschmerz, and the cause is not known. But it may just be another way nature tells you it is time to take action.
There are also ways to track ovulation including over the counter ovulation predictor kits. An ovulation predictor kit detects the increase in luteinizing hormone right before you ovulate.

The most common type of ovulation predictor kit involves testing your urine each day around the same time. About 24 to 48 hours before you ovulate, there is a surge in luteinizing hormone.

In order to get the most accurate results, it’s important to follow all the directions on the package. In most cases, manufacturers recommend you start testing about day nine of your menstrual cycle.

Since fertilization has not taken place yet, your baby is still in the planning stage. But next week should bring ovulating and fertilization and the start of your little one’s development. 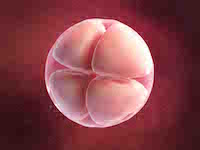 Keep in mind, baby making is a two person endeavor, and there are ways to boost your partner’s fertility. For instance, smoking may lower a man’s sperm count and decrease how well the little guys swim. If your partner is a smoker, encourage him to quit.

In addition, consider asking your partner to avoid excess heat, which can lower the quality and quantity of sperm. Ask your guy to temporarily steer clear of hot tubs, saunas and electric blankets while you are trying to get pregnant.

Stress can also interfere with conception. Although it’s impossible to avoid all stress, if your partner is chronically stressed, it can lower sperm count. Find ways for you and your partner to relax. Couples massages, yoga and meditation classes can all help lower stress for both of you.