During week four of your pregnancy, the embryo has traveled from your fallopian tube to your uterus and is ready to settle in for the next nine months.

Most early symptoms of pregnancy have not kicked in yet, so you probably don’t feel any different. But week four is usually when the embryo burrows into the uterus in a process called implantation.

In the majority of cases, implantation occurs between seven to ten days after fertilization. But it can vary by a few days. Because of the timing of implantation, you may not have even missed a period yet, and may not have taken a pregnancy test.

Some women experience implantation bleeding when the embryo attaches itself to the uterine wall. Although not all women have bleeding around this time, if you do, it could be a sign of implantation. Bleeding due to implantation usually only lasts for about a day.

If you do not experience any implantation bleeding, don’t worry. It’s not a sign of anything problematic. Some women also may feel a slight pain or pressure in their lower abdomen, which is also nothing to be concerned about.

At this point, some women may start to feel the effects of an increase in hormones. But it’s important to remember, every woman is different, and a change in hormone levels may affect some women more than others.

Early in pregnancy, you have an increase in progesterone and estrogen. Both hormones are also produced when you are not pregnant, but levels increase during the first trimester of pregnancy. Some women are sensitive to increases in hormones and may develop symptoms, which are similar to premenstrual syndrome (PMS). Symptoms may include bloating and sore breasts. 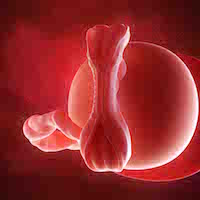 Your little one is really little. He or she is about the size of a poppy seed. The medical term for your baby at this stage is a blastocyst, and it contains about 50 to 100 cells. But despite your baby’s tiny size, there is quite a bit of development going on.

The amniotic sac is also starting to form around the blastocyst and acts as a cushion. By now, your baby also has three different layers of cells, which will eventually become all your baby’s organ systems. The ectoderm, which is the outer layer, will become your baby’s hair, eyes and nervous system. The middle layer, known as the mesoderm, will develop into your baby’s bones, muscles and heart. Lastly, the inner layer, called the endoderm, will soon be your little one’s digestive system.

By the end of the fourth week of pregnancy, tiny limb buds are also forming, which will become your baby’s arms and legs.

This very early stage in pregnancy is a crucial time in your baby’s development. Cells are rapidly dividing, and layers of tissues will eventually turn into all her/his organs. It’s exciting to think all your baby’s systems are forming during the first trimester.

During this time, your baby is vulnerable to things, which may interfere with normal development. That’s why it is so important to pay close attention to what you put into your body.