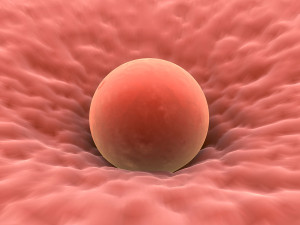 Ovulation can be an exciting thing, or it can be a stressful thing. It all depends on the perspective of the woman charting her own ovulation. For many women, ovulation is good because they’re excited about the idea of becoming pregnant, and they’re making sure they can figure out when the best time for them to engage in intercourse is going to occur during the month. For other women, tracking their ovulation is a stressful situation because they’re having trouble becoming pregnant and are currently doing anything and everything they can to increase their odds. Tracking ovulation is easier if women know what signs and symptoms to look for.

Cervical fluid isn’t pretty to notice or to discuss, but it is an important sign of ovulation. If you don’t pay attention to it now, it’s time to start paying attention. When your cervical fluid begins to change consistency and color, it’s a sign of ovulation. It should begin to resemble egg whites when it’s ovulation time. The day this occurs is usually the day a woman has the wettest fluid in her body, and that typically means she’s the most fertile during this time.

No one wants to notice any spotting when they are looking to get pregnant, but it’s not always a problem. When you ovulate, you might notice very light to minor spotting. It might seem jarring to notice this, but it probably happens more than you know. You simply never noticed it because it is so light and you’re not always looking at your toilet paper to inspect it unless you’re working on becoming pregnant or you are pregnant. Light spotting might occur in the middle of ovulation, and it might occur again before your period is due to arrive even if you are pregnant. It’s called implantation spotting at this point.

It’s a common side effect of an impending menstrual cycle, but cramping is also a sign of your ovulation occurring. It’s not usually too painful, but it does occur around the pelvis. You might also notice pain on one side of your pelvis, too. It’s a sign you shouldn’t ignore if it also occurs with the other signs of ovulation.

One of the most notable signs of ovulation is your bloating. You know you bloat when your period is a few days away, but you might also note a few days of excessive bloating prior to this, too. It’s when you ovulate that your body begins to change significantly, and it often seems you’re bloated for no other reason you can figure out. It might be significant bloating or just a little, but most women notice any change in the way their clothes fit even if it’s relatively minor.

It’s another sign of pregnancy and the impending start of your period, but it’s also a sign of ovulation. The best way to tell the difference is to note when it happens. If it’s happening just a week or two following the end of your period, you can assume it’s not the onset of a new period. It’s ovulation. You might notice your breasts seem a little bit larger and even heavier, and they are a bit more tender to the touch. Your bra might feel more uncomfortable than usual. You might even notice they are a problem when you’re working out if you have larger breasts to begin with.

Have you ever noticed sometimes you have a headache or you’re too tired or you’re simply not in the mood one day, and then you cannot get enough of your spouse or partner the next day? It’s probably because you are ovulating. There are a lot of hormones changing in your body when you are beginning the ovulation process, and it’s a sign. The best thing you can do if you notice this is just go with it. Take advantage of it, and hope that it works. Some women simply take this as a sign their bodies know what they need and that right now is when they should focus on that if they want to have a baby. It might not be nearly as scientific as the hormone explanation, but it works for many women.

Does your perfume suddenly seem a little overwhelming? Does your sense of taste or your vision seem suddenly stronger? It could be a sign of ovulation. It’s not always noticeable to women unless they are tracking their ovulation, but it’s something to notice. If you are tracking your ovulation regularly, taking note anytime you notice your senses are heightened can help you when you go back and look over your notes to compare when you think you’re most likely to ovulate.

If you’re tracking your ovulation, your doctor might encourage you to check for cervical changes. It’s done similarly to the exam given to you during your annual exam. You must insert your fingers in your cervix and feel around. It might take a little practice if you’re not a doctor so you can learn how to notice the difference from one day to the next. Your cervix is typically softer, it’s higher, it’s wetter, and it’s more open during ovulation than it is any other time.

However, if you don’t know what it feels like the rest of the month, it can’t hurt to examine yourself every day until you notice these changes. Once you’re familiar with the way it feels every day, you will notice when it seems a little different.

Tracking your ovulation is easier than it sounds, and you will begin to notice these small changes in your body when you pay attention. The best thing you can do is notice your body, pay attention to what it is telling you, and work on it from there. You have the ability to learn when you are ovulating every month by noticing these things and keeping records. Not all women ovulate a perfect 14 days from the first day of their last period and the first day of their next period, though that does make this easier.

If you are one of the many women with irregular periods, tracking your ovulation might be the only way you know when you’re ovulating. It can increase your chances of becoming pregnant or even avoiding pregnancy if that’s what you’re worried about. Listen to your body. It always tells you what’s going on if you stop to pay attention.